Surprisingly things don´t always go amazingly and exceedingly to plan, which may not make for great reading, so sorry if it´s not riveting, but here´s what happened.

We arrived in Cartagena, Colombia after the super good catamaran experience from Panama, we´d been on the island for 11 days and the sea for 2, it was the weekend, and we fancied some social partying. We were in Cartegena a beautiful walled colonial town, famous for some of the best nightlife in Colombia; except when the elections are on, and the Country shuts all of it´s bars, liquor stores and clubs!

Not really being famous for it´s arts or museums, although I did check them out, and possibly not being as impressed as others by the beauty of the architecture, being from Europe and in that respect somewhat spoilt. I was left with the unlimited supply of fresh passion fruits, the beautiful people and the incredible array of fabric/textile shops to be my highlights.

Next up was Teganga our final farewell to the Caribbean coast, a picturesque seaside village with a horseshoe beach. What I imagine was once a sleepy fishing village has become, because of the constant stream of backpackers, a 7 days a week party town. Finding myself drunk in the early hours of the morning, helping fishermen haul tree trunks onto a cargo boat and polish off bottles of Aguadiente (semi-tasty cheap strong sugar cane liquor), I thought, although fun, is this really what I want? 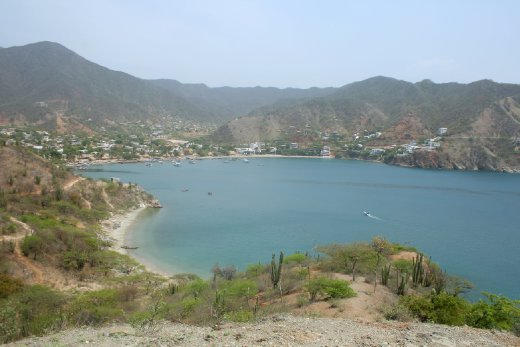 No. And so onto the 20 hour bus to Medellin, Colombia´s second city. The fact that the South American Olympics were in town meant that the City was buzzing with activity and good vibes, although from what I hear, this is normally the case in Medellin. Spending a few days at various free open air gigs, meeting the very friendly local people, visiting numerous Art exhibitions and the excellently designed Botanical Gardens, I was definitely starting to feel at home in Medellin. 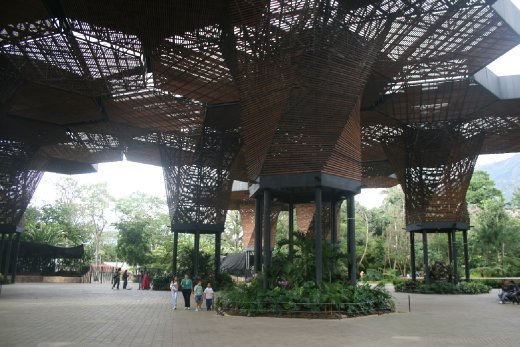 “Why would you want to visit Bogota when you are here in Medellin? In Bogota it´s cold and the people are cold.”
…
“Another thing, the people there spend hours and days philosophising whether or not a dog has a 5th leg, where as in Medellin we just say ´ít´s a tail´ and get on with it”, energetically explained a typically proud patron of Medellin while dissing/discussing the people of the Capital city, who live at a much higher altitude 8 hours away. I was clearly still going to go and see for myself, but it was an interesting metaphor, and insight into what is probably called ´Second City Syndrome´?

Back to Medellin with it all going so well, I was hanging out with some local ´Goth-ish´ graffiti writers, the alpha character with a now haunting, purple glitter tear below one eye. We were enjoying beers on the roof of one of the lo-fi bar´s overlooking the main square near Zona Rosa, the bar closed and we were out on the street for a while chatting. I mentioned I´d heard of a potential ´Gringo´ party we could maybe go to, and mix it up a bit. By this time we´d been joined by another friend of theirs, who was stocky, smartly dressed (standing out somewhat) and was semi-consistently snorting something Colombian.

Agreed we´d search for the party, we, eight of us, crammed into a regular style Taxi and headed towards the party venue, Colombian music blearing, the wheel arches screeching, lights flashing by and the carefree taxi driver laughing, mi gusto Colombia.

But the party didn´t materialise, there was some general confusion about what to do next, then :boom: I felt a mighty punch to the back of the head, I fell down (and bounced back up, because I´m pretty good at that), to see the smartly dressed dude swinging for me again… in the background I could see the others, clearly disapproving and concerned, but naturally going to side with their associate over me, as he demanded my sunglasses and money. Attempting to remember what “not a chance” was in Spanish, I shouted what I had, which looked to confuse him momenterily, then ran away.

Safely home, I woke the next morning, slightly concussed and feeling the situation was somewhat unresolved, and because the area of Medellin which appealed to me isn´t the biggest, I felt I should leave, but I love this place, dammit.

Manizales then, the quaint coffee district my next stop, but on arrival the capital was another bustling City, and I needed somewhere to rest. I read about a hostel called `Mona Lisa` an hour away in Rochelle. So I jumped on a bus, the scenery of the beautiful rolling hills covered with coffee plantations was incredible, I hopped out near the Church described in the directions, it was a nice pueblo/village, and the roars of the cowboys at the ongoing cattle auction filled the air.

I found the Hostel, and knocked on the big gates, a slightly bemused young man opened the door explaining there was no-one there, the owner was away on holiday for the week and he and his Amiga were looking after the place. I spoke to the owner on a Cellular who confirmed the above, but said I was welcome to stay and use the kitchen, pool, jacuzzi and roam the grounds all I wanted for $10 a night, perfect. 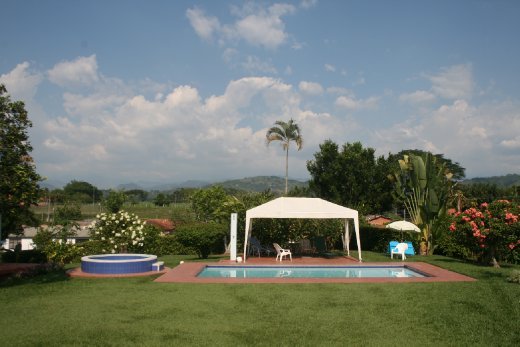 But/pero, although it was an idyllic and perfect place with friendly hosts, try as I might, I couldn´t find a local smile around, once I left the grounds of my new found budget mansion, I was met with offers of lifts to who-knows where, and unfriendly verbal exchanges at the fruit and food markets.

And so I spent my time watching brightly coloured birds come and go, practicing my Spanish with the young groundspeople about life, the olympics and the various flora around, swimming and cooking. The Welsh Cakes went down especially well, “muy Rico” they agreed, and so the recipe was passed on, again. Being too intimidated to interact with the locals and learning of their culture I felt I was wasting time here, and so it was time to move on again. So disappointingly after a few days of relaxing I jumped into the back of a pick up truck at the crack of dawn and waved goodbye to Manizales… 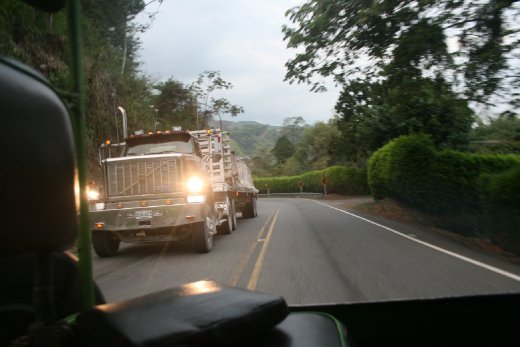 Arriving in Bogota, tired after the 12-hour breathtakingly beautiful but hairpin rich bus journey over the Andes. I had a good feeling upon arriving in the Candalaria district, with it´s bohemian style vibe, street art, nice looking restaurants and good music resonating throughout.

I checked in to a hostel there to find a Portuguese amigo I´d met in Cartagena, things it felt were finally beginning to fall into place again.

I stayed in Bogota for 9 days, enjoying every aspect and moment of it. Bogota is an amazingly cultural city of architecture, galleries and museums, notably Colombia’s greatest artist Botero´s collection, housed at the Museo Botero (which also houses many other excellent works by Miro, Picasso n that), a man who painted, sculptured and drew, inflated versions of the organic form. 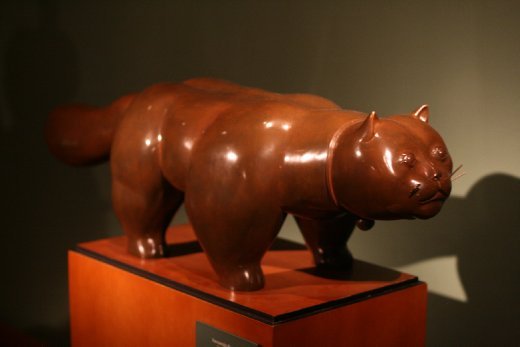 Conveniently there was a two week bi-annial Theatre festival on at the time, so we visited a few of the events. A highlight being an amazing acrobatic street theatre rendition of the history of Colombia´s influencial figure Francisco de Miranda, who it seems along with shaping modern day Colombia was also an amazing gymnast. Tomas 28.3

We met some amazing people in Bogota (who were very warm and didn´t talk too much about dogs legs at all) they showed us around the city by day and night, one evening partying 31 floors up in what´s rumored to be Pablo Escobar’s old penthouse apartment, with incredible 360 degree views of the city.

On the final evening, which happened to be Good Friday, the cable car to Monserrate, the church 3160m high on the top of the mountain overlooking the city, was kept open for worshippers until 5am in the morning, so after the bars closed we headed up there. Full of warmth, probably from a combination of factors; the hot Aguadiente being served, the excellent company, the illuminated view of a City I now love and also of finally feeling settled in Colombia, I returned to my hostel for a couple of hours sleep before the fast approaching flight into the Colombian Amazon!

As the plane descended towards Leticia, which has open borders with Brazil and Peru, I saw the awe inspiring Amazon basin for the first time, trees as far as the eyes could see, dissected by the snaking of the incredible mile wide Rio Amazonia, epic.

From Leticia we were to get a boat up the Amazon River to Iquitos, the largest city in the world not accessible by road or rail.

We needed to get our entrance stamps for Peru that day as our boat left at 4am the next morning, so we skipped over the Amazon river to Peru in a boat taxi, 25 mins, got our stamps, had a beer there with the locals in a bar full of monkeys, before returning to Colombia for lunch. In the evening we walked over to Brazil, had a few Caipirinias before heading home to sleep briefly, an odd experience! At 3am we were on the back of speeding moto-taxi´s setting off to catch a boat up the Amazon river, the beginning of a new chapter, Peru! Whoohoo!

* I had a slightly drastic haircut by an over enthusiastic hairdresser, but change is good and I´m sure it´ll grow back.

* Sam went to meet his brother in Equador for some Galapagos action, where sealions walk the street =)