The trout are farmed, but in cages in the Lake, so I imagine they eat the same nutrients and goodness as the other trout in Lake Titicaca, but have to go to bed earlier. They could have relationships with other fish, but without direct contact, through the fence, sort of like a fish boarding school? (No? Sorry, it´s been a while since I last wrote)

So we were now in Cochabamba, BOLIVIA! Having crossed the border with ease and official smiles allround, now a group of 6, the Birthday month is still the excuse, and the fiesta seems somewhat contagious. After lots of walking, asking and discussing, we find a nice hostel with a terrace overlooking the lake. Perfect!

The view of the lake was bright, and the wine, incredibly cheap, we swilled our way through the reserve then went exploring. The incline was insane, and on the way up, the streets were lined with shops bursting with beautifully colouful, and incredibly intricate, well crafted clothes. Shop-Shop-Shop! Was the primal instinct but suspicion suggested in the heart of Bolivia, these things will be of even better value (NB: A woolen hat here costs $3)

We instead challenged some kids playing football on the gradient, us two them five, initially it was us displaying some fast and flamboyant football skills, this didn´t last long, five minutes later I thought my lungs had already flown home and the ninos ran rings around us. How high up are we anyway!?

2,570m says the guidebook, a perfect excuse for my lack of fitness! Retiring, we sat on the shore of the Worlds largest navigable lake and ate some of the finest trout anyone in the group had ever eaten, it was delicious. (I just hope we didn´t prematurely end any fenced romances.)

Later that evening we met and befriended the Strongest man in Belgium (but currently not in Belgium).

The sun rose above the Lake earlier than I´d hoped the next morning. I remembered we´d decided to shun the rite of passage to the ´Isla del Sol´, allegedly the birthplace of the entire Inca existence. Not in a ignorent manor, I´d read all the history at my disposal, but solely after being advised it involved lots of excessive walking, hidden charges and the existence of over-imaginative guides. So instead we hired 5 Motorbikes. 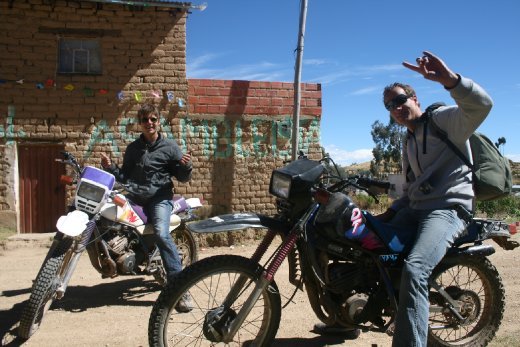 We rode like champions around the climbing coastal road, initially, 7 people on 5 (in retrospect, clearly) visibly tired motorcycles, safety is relative, there were no cars around and everyone could swim. We all arrived at the Mirador, eventually. A rear flat tyre caused my bike to shed my passenger temporarily, after an attempted roadside fix with some very nice locals, the tyre was no more. I wrestled the bike onwards, slowly.

At the mirador the view was incredible, the bikes not so much, one had overheated badly, possibly a serious engine problem, the other a broken clutch cable, mine without a tyre. We returned two bikes, and were offended when the vendor asked us for 5 hours rental for 5 bikes, we´ve spent the last two and half hours walking back Senor Loco!! Some firm and slightly scary discussions took place and the bill was met half way.

The next day was for a boat trip on Lake Titicaca, excellent. The lake was rough with high winds, but we´d stocked up on supplies and after 45 bouncy minutes we docked at a floating island. Solid ground was preferable so we climbed a small hilltop, attached by a bridge  and had a very nice picnic. 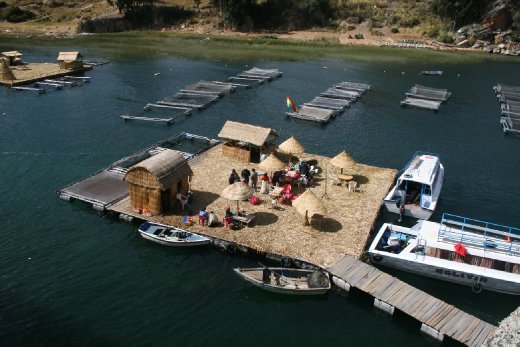 After lunch it was back to the boat for some fishing. There was only one rod and Sam took the bull by the horns, stepping up to cast off first. Casting off from the roof, the weight and bait whipped back with vigour, too much it seems as it naturally circled it´s fulcrum and ´whoomph´ through the side window of the boat! Yikes. “Tranquilo” our captain re-assured us, that´s what deposits are for, fair enough.

Back to the fishing, the line was severed so I took both parts and executed my favourite knot, my turn now to cast off. Equal enthusiasm, a slipped knot and the weight sent a few hundred meters into the distance; my ex-favorite knot. No weights left, the rod was put away. Here’s hoping we don’t break everything we touch in Bolivia, thankfully we didn’t… 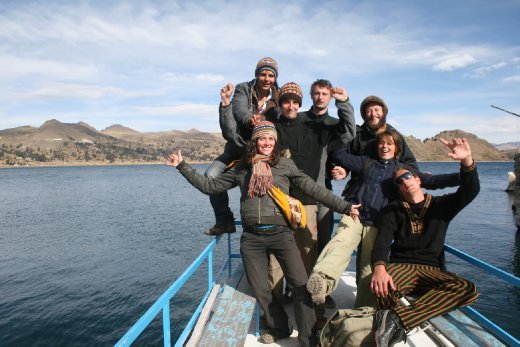 We left the shores of the Lake to nearby La Paz that evening, arriving under the cover of darkness around 11, the locals not so discreet in their cover of covet. Feeling pretty scared we tried a few of the recommended hostels, after 45 mins of walking in a group, a 3 minute wait for a response from the reception at the most popular party hostel was enough to send us all packing.

We found a great 4 storey hotel with an incredibly leafy and bright atruim leading to some nice clean rooms for relative buttons, and so the fairytale resumed.

The next day we explored the city, Llama feotuses two a penny, this place looks not much happier in the day as it does in the night, hmmm. We bought amulets for good luck, then went down the local boozer.

Take a seat downstairs the barman suggested, no, no, we prefer rooves I said, but thanks, on walking up the stairs and seeing a dank room without windows, heavy with muscle, we all about-turned and headed downstairs.

Unsatisfactory behaviour for the gents upstairs, and we were verbally coaxed back up the wipe clean wooden stairs. This’ll be interesting, and potentially deadly.

The towering Strongest man in Belgium (but currently not in..) was instantly accustomed by a short but stocky self-proclaimed Bolivian ‘Nam’ War vetron (is that possible?) and challenged to an arm wrestle. This broke the ice, our man faigning a loss and we already had a group of friends in this room without days or nights. It wasn’t the active ones that scared us/me the most, it was the silent group in the corner with deadly eyes.

Anyways, we spent the best part of our day drinking super cheap booze, hugging, then sharing strength stories with our new friendly locals in this windowless void, but I couldn’t take my mind off the organisation in the corner, or my eyes off the innocent framed ‘happy kitten and flowers’ print hanging on the wall, pondering just what extremes it’s eyes had witnessed in it´s lifetime over the shoulders of these men. 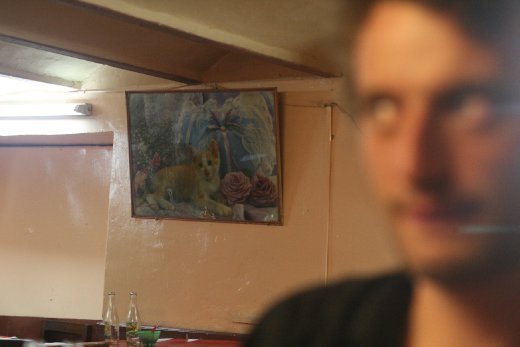 We left the bar and headed homewards, briefly distracted by bars and parties along the way, come to think of it totally distracted, I recollect walking out of an infamous bar (with terrible music) at 9am into the bright streets of La Paz, walking in the general direction of home and seeing a helpful gent dressed in a zebra outfit offering to guide us over the road, “¿Todo bien?” I offered.
“Si, muy bien, gracias” The zebra replied.
Really!?
Yes, really, a cross safely campaign in full swing, but not what you want when reality is already a stranger.

La Paz you´re too much for me, I now understand why people lose weeks of their life here, let´s go, we´re not learning anything, but not until we´ve conquered the Death Road… 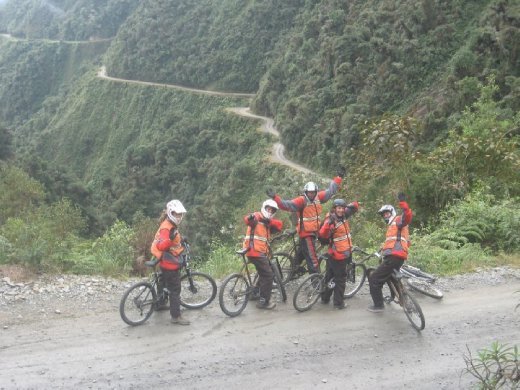 And so, 7am the next day we set off for the infamous Death Road! A 61km downhill mountainbiking extravanganza, previously the worlds most dangerous road (now bypassed by passenger buses), we had only our crew in our group, no excess baggage thanks to mi hermano´s organisational skills. We got kitted up and took to the road in the freezing heights, it was unbelievable. Interesting to see the group naturally find it’s correct order of descent, experienced speed freaks pushing on with the guide, throwing caution to the wind, following, the less experienced and those with faulty brakes!

Here’s a little video of the action, Sam you legend….

La Paz our work here is done. If in doubt, head into the wilderness. We booked our bus tickets and left in the evening, heart-brokenly leaving Sam who´d decided to conquer ice-climbing a 6088m mountain, solo, badman.

And so it was onwards to Rurrenabaque, an 18 hour terrifying bus ride down roads of equal width to the ‘Death Road’, just because it’s not got the title of the ‘Worlds Deadliest Road’ doesn’t mean it’s not deadly.

Arriving at 4 am in Rurrenabaque we were scooped up by an early-bird tour-guide, he was offering competitive rates for a 4 day trip into the Pampas, exactly what we were looking for. The guy looked and talked like a used car salesman and we’d normally avoid this sort of hustle, but after asking all the necessary questions we couldn’t find any reason not to go with him, so we left for the Pampas at 9am.

The Pampas is a vast area of flatland with a river running through the middle, all the animals need water and so hang out by, or visit the river regularly, it’s basically the highest concentration of wildlife visible outside of the African Plains, that would have been some detour. The first thing we noticed was that for every tortoise or bird of paradise we saw there seemed to be 5 alligators, they were literally everywhere along the river bank, licking their lips as we chugged by in our motor canoe. Yikes! 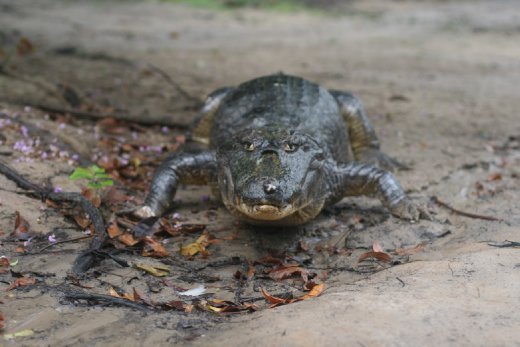 The 4 days were amazing with lots of different activities, piranha fishing, hammock testing, eating delicious food and watching the burning sunset over what looked like the African Plains, it doesn’t take much imagination to add a few mental elephants and giraffes. Even easier when playing ‘The Lion Sleeps Tonight’ on the ipod speakers.

One activity we, at the time, wished we’d missed out on was the ‘Anaconda Finding Expedition’ aka ‘The Patience Testing Wet Welly Competition’ but there’s always a silver lining.

And so we trudged through knee-deep odourfull swamp on the instructions, ‘If you see an anaconda, grab it by the neck and hold it until we (the guides) come over and relieve you of the biting muscle-bound monster.’ Ok, firstly, where does the neck stop and the tail start? Secondly, I’m not grabbing a snake, they wriggle through my nightmares regularly enough already thanks. 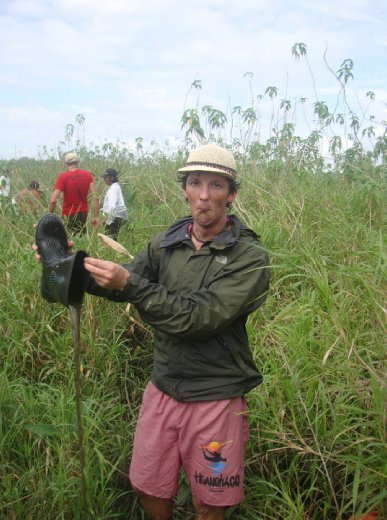 And so we spent the next few hours playing shouting games with some frogs and hoping that the army of biting things swimming in our wellies weren’t laying eggs. Until one guide motioned for everyone to come over, so we all splashed our way over, an anaconda!? No, a deadly cobra! Oh great, they live in this paddling pool of anti-fun too, thanks for the heads up Mr Guide!

After a good old search for the elusive Anaconda the guides had started off out of the field admitting defeat, and we too,happily headed in that direction, but

Looking over, we saw a dude with one arm in a sling, the other arm in the air, wielding a long dark snake! The snake was buckling around and he was wrestling with his immobilised arm trying to get the camera from around his neck and get an close up of the snake in his other hand! All this dancing meant our Hero fell backwards and landed with a splash on his back, but did he let go of the snake? Hell no! God bless Australians. 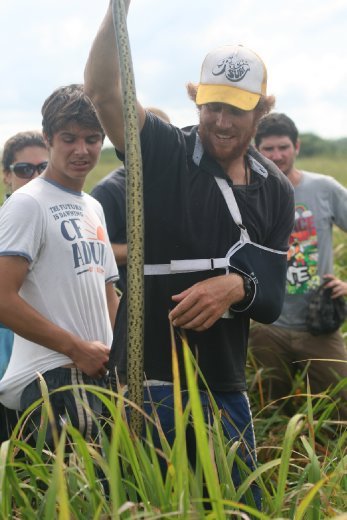 So we’d met an Anaconda and had an incredible time but it was time to leave. Andy’s flight to London departing in 48 hours from La Paz, this magical chapter drawing to a close. Soon to be alone again, deep breath.

* After dabbling with the tastes of the fishy underworld, I’m now a fish eater, groovy.

* Pink dolphins are the ‘Kings of the River’, so when they’re around it’s safe to swim in the piranha and cayman infested waters, safe!