What seems like an age ago now, I wrote we´d just returned from a trek through the Cordillera Blanca in Peru, starting off from Huaraz.

Huaraz isn´t a particularly exciting city, but with the mountain ranges on both sides looming, challenging, it´s a City to prepare both mentally and resourcefully, for exposure to some seriously remote and potentially dangerous trekking.

We decided to go for the Santa Cruz 3/4 day trek, which takes you through the range, across flatlands, through meadows, past a mountain sporting a glacier cap, (of Paramount pictures fame) and over a 4,700m pass (ridge thing). “Cool” I said, and the suggestion was to go solo, no donkeys, no guide, just two amigo´s having a pop at one of the worlds toughest terrains carrying all food, camping equipment, photocopied topography maps and a bag of Coca leaves for the altitude. 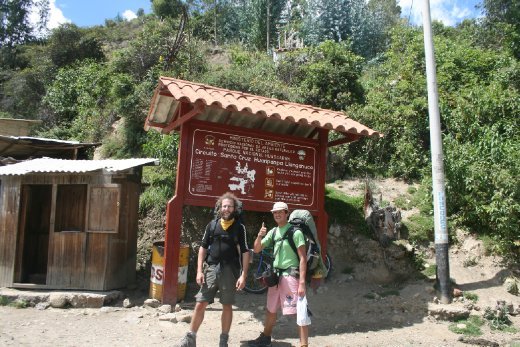 The first day was blissful, the bags were heavy and the gradient steep, but the sun shone and sparkled in the tumbling waters of the river which the path roughly followed, the river that had eroded this valley no less? We ascended through a pine forest and above it, to some meadows with cactus displaying brilliant gradients of greens and yellows, happy lizards scuttling around and hummingbirds doing their thing. We stopped a few times to appreciate the beauty, rest our bodies, eat something small and drink some coca mate. Mate, once drank, ignites the will to forge on. After 3.5 hours we thought we must be getting close to the first camp site, but realised we´d misread the map and were quite a lot further back than we thought, not much we can do about that really. 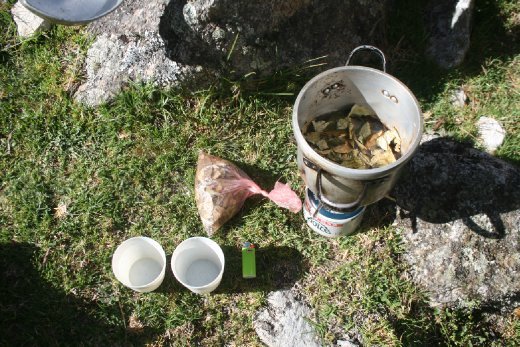 So we picked up the pace and continued uphill. Still no campsite in sight, the air was getting cooler, the lizards had gone to bed and the terrain was becoming more barron by the minute. An hour or more later, we thought if we don´t find camp soon we´ll just camp anywhere. Let´s just get over the next bank, if there´s nothing in sight, we´ll set-up camp and cook dinner, we are after all, without guides or donkeys.

OK, logic has it I`m sure that the camp will be in a spot which has a good view of the glaciered mountain. Onward to the next ridge we agreed. Almost jogging now on a reserve fuel tank, we conquered the hill and glanced over at the normally diconcerting but now reassuring sight of adventure tourism. Twenty little tents, six donkeys and a make-shift shop. High five.

We set up camp, ate like kings, dressed like clowns (well I did) and drank Cocachada, before an early night. 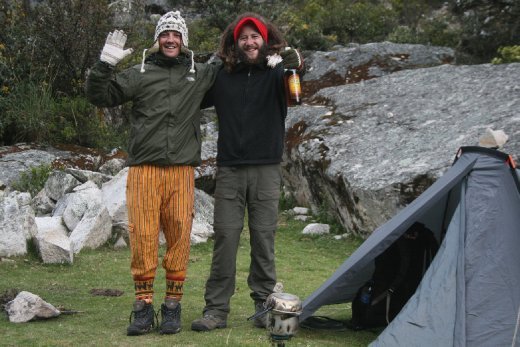 Waking up early, we cooked bacon and eggs for breakfast, packed up camp and set-off, but something wasn`t right.

I was ill, no not now, not ever, but please definately not now. Maybe it was altitude sickness, maybe the water from that dubious stream which had wriggly things in it, who knows, but the next few days were going to be tough. So although the following days we passed some beautiful emerald blue lagoons at the foot of some of the biggest mountains I`ve ever seen, we kept the pace, laughed, made video diaries, did all the same things, there was this overwhelming illness which filled in the blanks, turning my eyesight keleidascopic at times and hindering my appreciation of details. We made it over the 4,700m pass to the `mirador` but unfortunately it was pretty misty so we couldn`t see much (Could they not install a projector to project the image of the intended view onto the mist for such occasions?). 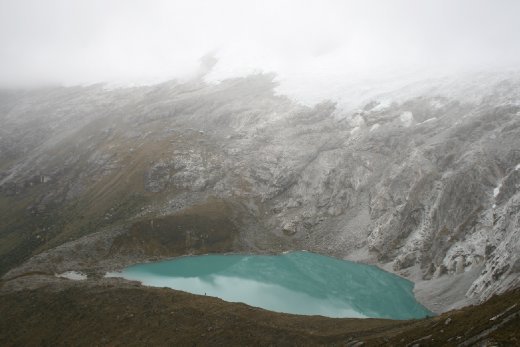 It was then onto the descent, homeward bound, the descent was insanely steep and slippery, there was some heavy rain thrown in for good measure, we, after 3 days were now a marching unit and determined. We stomped our way for 7-8 hours for the second day running, potentially trying to make it home in three days instead of four so maybe I could feel better, but the 3km to the next campsite proposed on the sign was optimistic, and after maybe 5km we saw the site, it was a bunkhouse, a converted church, hallejuliah. 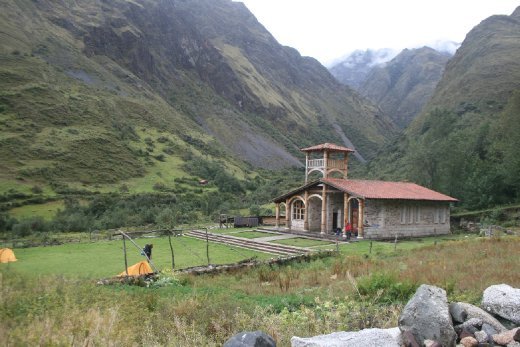 Hot tea and a bed instead of the 1.5 man tent we had helped, I started to feel a little better and the next afternoon we were home.

Back in Huaraz we were congratulated on making it in good time and solo, and so decided to celebrate, we went to an Amazon bar with all the people from the hostel where we drank pickled snake shots with some warm liquor chaser which looked to have made some of the locals crazy. My shot was poured and one of the snakes eyes popped out and bobbed up and down in the glass, “¿verdad?” (really?) I said, and the lady nodded. So down the hatch it went, next the warm liquor, racing down after it into my stomach like ingredients into a witches brew. The next day I briefly turned into a Unicorn. After several more drinks in the bar, having just conquered one of the toughest passes at altitude, Sam decided to take on another mountain, a local man as wide as he was tall, it started with a drinking game, moving swiftly into an arm wrestle then summeting in a game of `mercy`. Shirts were off, furniture and wall hangings irrelavent, it`s safe to say we weren`t beaten in the Cordillera Blanca. 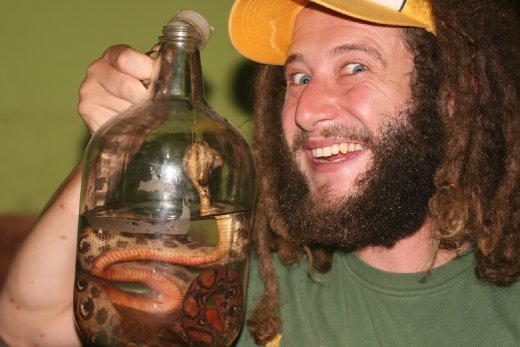 After Huaraz it was on to Lima where we scooped up mi otra amigo, ready for a month of Birthday Fun.

Memories are hazy and pictures are worth a thousand words and all that, so here`s a combo.

Back to Huanchaco for my Birthday, we got the balcony terrace room and were joined by some amazing amigos to make for a four day birthday bonanza! 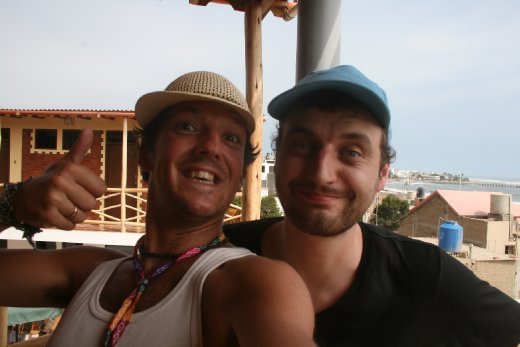 Then it was on to the desert oasis near Ica, Huacachino for some crazy sandboarding and sand buggy-ing.. 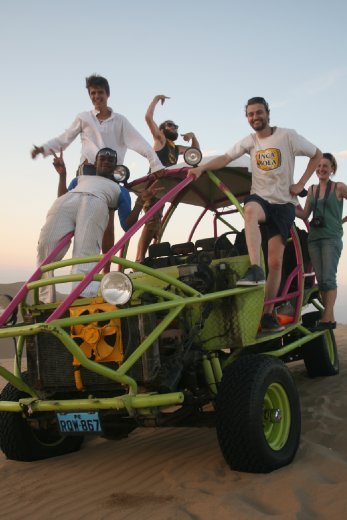 After sandboarding we hit the road and headed to Cusco. Cusco, a picture postcard city, full of postcard buyers. To get out for a while white water rafting seemed like a good idea, until half way through it started hail stoning for the first time in the `captain`s` memory. No photos exist as they were extortionatly priced, but it brought the super crew closer, only the mental scars of the icy water, and the memories of the band of brothers hauling each other out of the rapids while participating in oar to oar combat with the rival other rafts remain.

The rest of the time in Cusco, involved dodgy hostels, different sleeping patterns, as many free drinks as you want at the bars at night (you pay in the morning), but amazing fresh fruit juices at the market.

Then on to Machu Picchu, the hard way, a 6 hour bus ride from cusco for $3, a 3 hour van ride round roads with hairpins on hairpins for $2, we made good time, so it was too dark to walk, we were offered a place to stay for a $1, 3 hours sleep then off again at 6am. The taxi we had took a corner on the way to the Hydroelectric plant, but his wheel went the other way. 3 sheared bolts aren`t going to grow back any time soon, so sadly we left him to his own device. 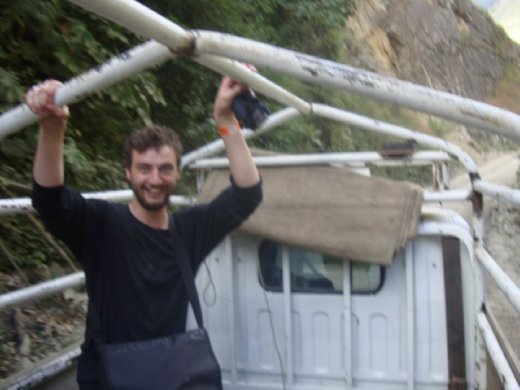 Hitchhiking came up trumps and we were soon in the back of a caged van, only to find the road had collapsed 30mins ahead and we needed to take a cargo trolley across a 200m wide 150m high gorge on a thin cable. Great. Luckily I coupled with an old lady who`d clearly done it before and who`s bones seemed pretty light, we glided across no problems. Mi 6`4″ amigo drew a long straw and was paired with a 6`5″ Canadian, having worked on construction sites before, he`d already noticed the bolts wern`t up to UK regulations. A ghostly but elated amigo emerged on the other side. 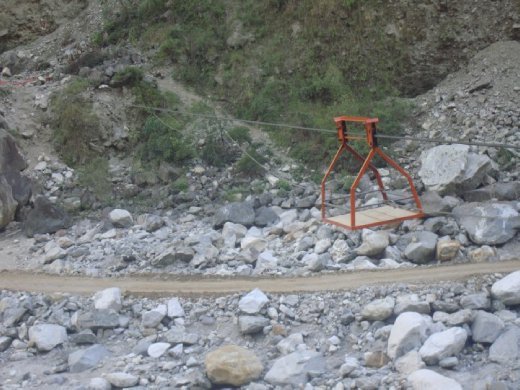 The walk to Aguas Caliante (the town at the foot of Machu Picchu) was maybe a 4 hour walk along the train tracks, reminscent of `Stand by Me`, our ipod helping us keep pace and high spirits with `Selected Ambient Works`. A beautiful evening of food and beer in an insanely touristy but charming town was had, listening to the best live Peruvian music I`d heard in the street, played enthusiastically by traditionally dressed musicians, while children ran around the main square. Making me realise that this town does primarily exist because of tourism, but this means good schools where children from all around are able to attend and benefit from, groovy.

We set off for machu Pichu at 3.45am, stopping for coffee first in the dark, a rusty flashlight between us, we marched up the intense 1 hour climb. Only having one pace-setting for inclines, which is go fast and get there sooner then it`s over with, we overtook groups of people and ended up in the first 20 people in the queue, it was worth it, whoohooo. 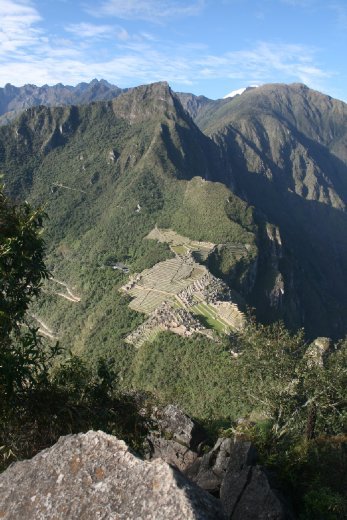 One of the most emotional experiences of my life. 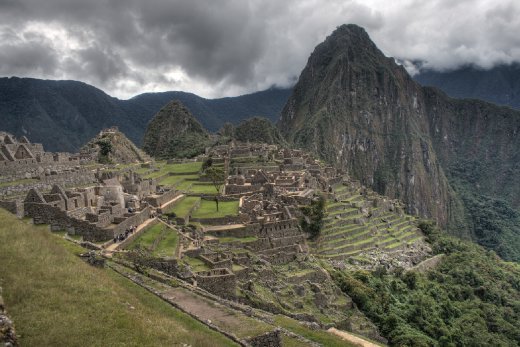 Drained emotionally and physically, we opted out of the long way home and got the bus down the hill then the train back to Cusco. Overwhelmed. Still to this day. Forever.

* Peru has it all, especially magic.

* Puno, our last destination in Peru on Lake Titicaca is avoidable.

* The addition of Andy has naturally multiplied fun levels.